The graduation ceremony for the 2019 Modern Apprenticeship Programme themed ‘Exploration and Practice in the Workplace’, sponsored by Sun Hung Kai Properties (SHKP) and co-hosted by Breakthrough, was held recently. The event marked the growth and development of 17 young people from six secondary schools within half a year, during which they took part in a series of life-planning training workshops and camps, as well as internships at SHKP and its subsidiaries. Under the guidance of SHKP staff mentors and Breakthrough tutors, the apprentices got to know themselves better and gained valuable vocational experience. The programme also broadened the students’ horizons of workplace life, helping them explore and map out their career paths.

At the graduation ceremony, the apprentices were awarded certificates in recognition of their efforts in the programme during the past six months. In addition to recounting their unforgettable experiences, the apprentices thanked their SHKP mentors and Breakthrough tutors, who helped them build up the confidence to leave their comfort zone. Apprentice Lai Hoi-ying said that working in an SHKP shopping mall as an intern was a new experience for her. Whenever she was tasked with responding to challenging enquiries, her colleagues would patiently teach her how to handle them, allowing her to develop interpersonal skills and deal with difficult situations more effectively. Another apprentice, Sin Chun-hei, said he came to understand the importance of responsibility through the programme. He admitted that initially, he had little interest in an internship and was reluctant to go to work, but a wake-up call from his colleagues led him to change from being apathetic to proactive at work, a transformation that surprised both his mentor and his tutor.

Addressing the ceremony, Breakthrough General Secretary Joyce Man expressed her gratitude for SHKP’s support for the Modern Apprenticeship Programme throughout the years, which saw youngsters deepening their self-awareness while gaining workplace soft skills under the life-impacting guidance and coaching of SHKP staff mentors. Chow Wai-hung from The Royal Garden Hotel, who participated in the programme as an SHKP mentor for the first time, said he was pleased to be able to support young people in the workplace in a mentor-apprentice relationship and witness the transformation and growth of apprentices during the internships, which made him realize the significance of the role of mentors. This year, SHKP provided internships for apprentices in a variety of positions, including property management, shopping mall promotion, hospitality and clubhouse services, and construction.

SHKP has been running the Modern Apprenticeship Programme with Breakthrough since 2003. The programme offers diverse personal growth training and internships to students who have underperformed academically, helping them explore their career aspirations for future development. Over the past 17 years, the programme has enlightened and provided opportunities to over 300 young people who faced limited academic horizons. This year, the programme expanded the target group to students in secondary four in a bid to help them develop their self-identity and obtain work experience earlier for better life planning.

1. Representatives from SHKP and Breakthrough at the 2019 Modern Apprenticeship Programme graduation ceremony with mentors to mark the growth of the apprentices over the past six months. 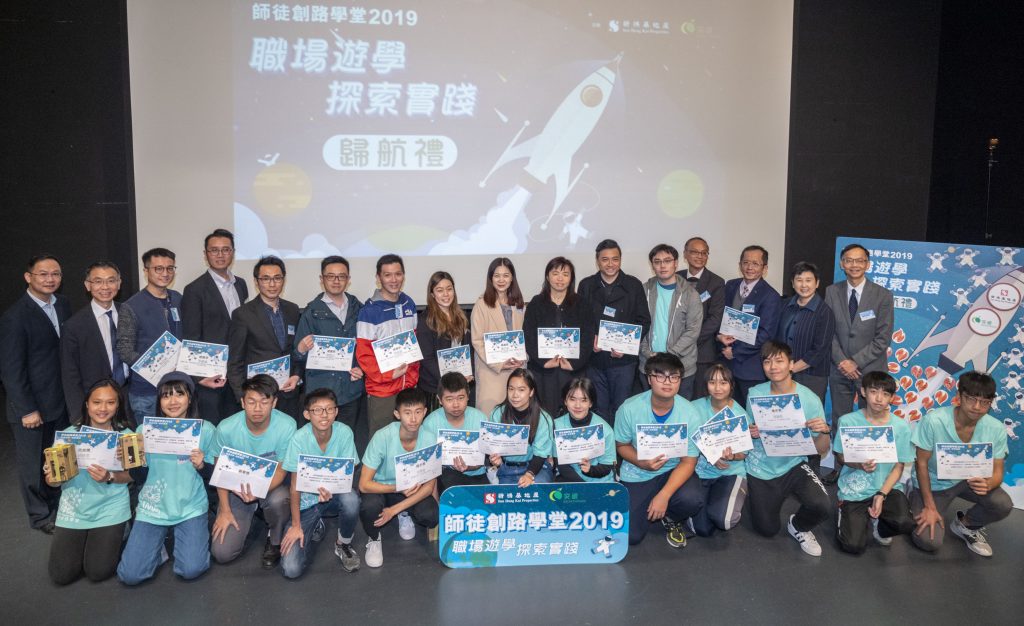